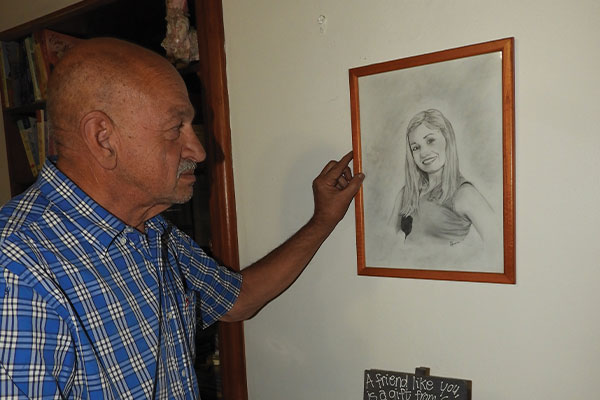 Rustenburg – After seven years in hiding, Gerhard Jansen van Vuuren was tracked down and arrested on Thursday 18 June 2020 in Rio de Janeiro, Brazil, for the murder of his ex-girlfriend Andrea Venter on 2 May 2011.

Before the murder, Andrea had taken out a protection order against Gerhard and after her studies at Potchefstroom, she relocated secretly to Johannesburg. The obsessed Gerhard called 34 accounting firms before tracking her down.

He stands accused of stabbing his girlfriend Andrea Venter to death at the entrance to her housing complex in Fourways, Johannesburg, before attempting suicide by cutting his throat and laying down next to her body. Paramedics arrived on the scene and were able to save Gerhard, but Andrea was declared dead on scene.

Gerhard was supposed to stand trial on 20 May 2013 in the South Gauteng High Court and had been denied bail twice by the Randburg Magistrates’ Court on grounds of being dangerous and a flight risk. Gerhard’s legal team again applied for bail, this time at the High Court… where his bail was granted. Four days before the start of his murder trial in May 2013, Gerhard fled the country using false documentation.

A warrant of arrest was issued by Interpol Pretoria wherein a process to trace and track him down was expedited. In August 2013, he was arrested after being spotted by a retired local police officer in Brazil and charged for having false documentation. In an interview with Platinum Weekly in 2013, Andrea’s father, Dries Venter, said: “For three months and nine days we prayed that Gerhard would be found and arrested”.

Regrettably, Gerhard was released in 2015 in Brazil after serving the sentence for false documentation. In the meantime, Interpol Pretoria had been in contact with Brazilian authorities to locate him.

Venter’s family was shattered after their daughter’s murderer was released and he once again disappeared.

Since then, Venter’s mother Annatjie passed away in 2016. “After the death of her miracle daughter and the escape of her killer, my wife was heartbroken and five days after her 63rd birthday, she passed away,” Dries said.

The loss of his daughter and his wife was devastating. Mercifully, Dries remarried, his new wife Daleen Venter – supporting and helping him to continue forward.

For the last seven years, Dries never gave up hope that his daughter’s killer would be found. He printed out photos of Gerhard and placed them in the windows of his car just in case someone recognised him and had information.

He never gave up the search.

There were many tips supplied – but nothing ever turned up solid.

Several years later, due to the work done by law enforcement including SAPS's Investigative Psychology Section, Interpol Pretoria, the National Prosecuting Authority and the Brazilian Federal Police, success was achieved which led to the arrest of the murder fugitive.

Dries was sitting in front of his computer where his desktop screen is a photo of Andrea and her mother when his phone rang. “I didn’t feel like answering my phone, but then I saw that it was brigadier Gérard Labuschagne who was involved in the search for Gerhard, I took the call. He asked if I was sitting down… He told me that Gerhard was caught and in custody,” a tearful Dries said.

Gerhard’s mother agreed to an interview with Platinum Weekly on the condition that we do not mention her name. “I will always remember Andrea fondly. We used to laugh a lot when we were together. I feel so sorry for the Venter-family and I am grateful that they welcomed me into their home and granted me the opportunity to apologise. I have also lost a daughter and my heart goes out to them,” Gerhard’s mother said.

She added: “I lost contact with Gerhard while he was in Brazil and I look forward to seeing him. He is still my son and I will support him, but the law must take its course.”

National police commissioner general Khehla Sitole said that their focus remains on extraditing Gerhard into the country to stand trial for the murder of his ex-girlfriend to bring closure to the family and friends of the deceased.

Gerhard will be kept in police custody at a public prison in Rio de Janeiro, Brazil, until the extradition process, that has been granted by the Supreme Court of Appeal, is expedited.