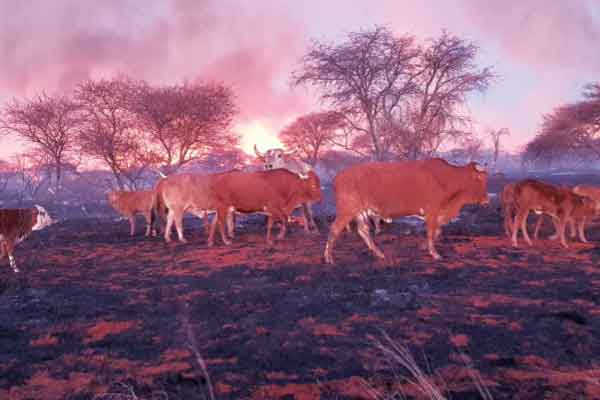 Heroes rising from the ashes

Thabazimbi – When a fire broke out on Saturday 28 August, Matlabas Plaaswag rushed to the aid of farmers living along the Matlabas River in the Inkerman area outside Thabazimbi.
With the fire index fluctuating between red and orange leading up to the day, strong winds and dry grass only added fuel to the fire. What started out as two fires caused by lighting soon created havoc and an estimated 3,000ha were destroyed, along with some of the animals which were not able to escape its destructive path.
Community members from as far as Steenbokpan, Soutpan, Sentrum, Thabazimbi, Cumberland and Rooibokkraal came to the rescue. At around 00h15 on Sunday morning, the fires were finally brought under control. Matlabas would like to sincerely thank everyone who assisted in fighting the fires, as well as Don and Reikie May for the food they prepared for the teams. It was community care at its best.
The fires also left farmers high and dry without feed for their livestock – but thanks to generous donations from the community there should be enough provisions for the season. Matlabas is in the process of arranging storage and transport. The cash donations they received also made a significant impact in this time of crisis. However, it has come to light that the cattle wires as well as water pipes have sustained serious damage and a plea is sent out for donations of new or second-hand rolls of wire, droppers, poles and water pipes.

Donations can be dropped off at the following points: