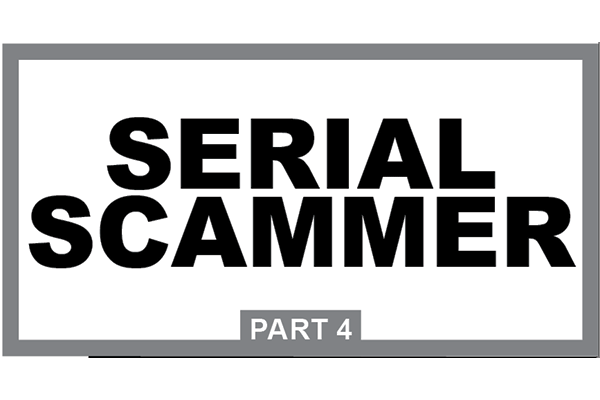 Background
Rustenburg – Platinum Weekly was made aware of a man pretending to be a lodge owner in our area, so we set out to investigate. We ended up going down a rabbit hole of scams.

The audacity of this serial scammer is mind boggling. We are placing only one or two of his scams (per week) in our newspapers. We already interviewed several of his victims. This serial scammer is also extremely dangerous and armed. He was recorded online, taking out his gun and threatening to shoot a man who confronted him about his scams.

It almost plays out like a movie… except it’s not. It’s real life and it’s real people who lost real money. It is a pity, however, that only some of his victims have opened criminal cases against him. In some of the cases his scams appear to be nothing more than a power play... a need to impress the ladies...

More and more victims are coming forward and Platinum Weekly aims to expose all of his scams in the weeks ahead. We hope to warn people about his modus operandi, so that they don’t get caught up in his web of lies. Hopefully he will be brought to book soon so that his identity can be revealed.

To protect his victims, we will keep them anonymous.

The gemstones
Speaking to Victim 8, we got to see a side of Mr Scammer we have not seen before. It seems that he is actually quite knowledgeable about an array of topics and quite the conversationalist. “His general knowledge is extraordinary.

There is nothing you can ask him for which he cannot almost immediately give you a very clever answer to. He also knows the names and intricate details of several influential people,” Victim 8 told Platinum Weekly.

Victim 8 met Mr. Scammer while working at a guesthouse where he was staying in December 2021. She warmed up to him when he told her that his daughter recently died. During a conversation she mentioned to Mr. Scammer that she had valuable gemstones including emeralds [not diamonds] that she was looking at selling.

He apparently said that he has a contact at a diamond dealer in Braamfontein and that he can help her to get the necessary certificates, which according to him she would need – if she wanted to legally sell the gemstones. “He would do it as a favour he said, and will only ask me R1,500 to cover some of the costs,” Victim 8 said.

By now we know that Mr Scammer is extremely good at getting people to part with their money. Victim 8 gave him the money in cash. Two days later he told her that he was able to find a buyer for the gemstones, and that she had to give him another R1,500 to get the ball rolling – which she did.

Extremely excited about the money she stood to make from this transaction, Victim 8 had the gemstones cleaned, incurring even more expenses she did not budget for.

In the meantime, Mr. Scammer sent her a photo of her ‘certificate’. She immediately became suspicious when she saw that the certificate was dated 2009. Considering that he also found an excuse for every day for the week as to why the buyer could not meet for the transaction, Victim 8 demanded that Mr Scammer return the money she paid him.

And true to what he usually does in the finale of his performance, he blocked her number on his phone.

A very expensive favour
Victim 9 met Mr Scammer when his ex-wife asked him to accompany her to a job interview, she felt a bit uncomfortable about.

By now we know that Mr Scammer first interviews women online and if he likes what he sees, he lures them to a remote location and tries to scam his way into their panties. Something he is not very successful at.

Of course, her application for the fake job was successful. Victim 9 told Platinum Weekly how Mr Scammer almost immediately started reeling them as he talked about his ‘very successful’ diamond trading business. He showed them all his ‘credentials’ and ‘certificates’ which indicated that he is a legit diamond dealer. He also invited them to accompany him to a meeting where he had to conclude a very lucrative deal.

At the restaurant, they apparently witnessed how Mr. Scammer met with another person in the diamond trade, who then gave Mr Scammer a cheque for R32 million. [Note, cheques have not been valid in South Africa for some time now, and since November 2020, you cannot pay a cheque into a South African bank account.]

Mr Scammer offered them the opportunity to also make a bit of money in the diamond trade. He felt some kinship with them since he met them... and all and all. Well, he got Victim 9 to part with R12,000.

He then kept them on the line for a day or two. It was when he offered Victim 9 a top job at a diamond mine in Kimberley, when Victim 9 became suspicious. But it was too late. The curtains came down when Mr Scammer blocked their numbers on his phone.

He operates all over the show. If some of these stories sound familiar to you, please let us know about it. Even if you were scammed a year or two ago, you can still report it to SAPS. We urge victims to go to their nearest police station to open a case. This dangerous man should be brought to book.

If you missed part 3, you could read about it in Platinum Weekly’s 22 April issue.
Watch this space for part 5, where more of his scams will be exposed.

*Names have been withheld to protect the victims.