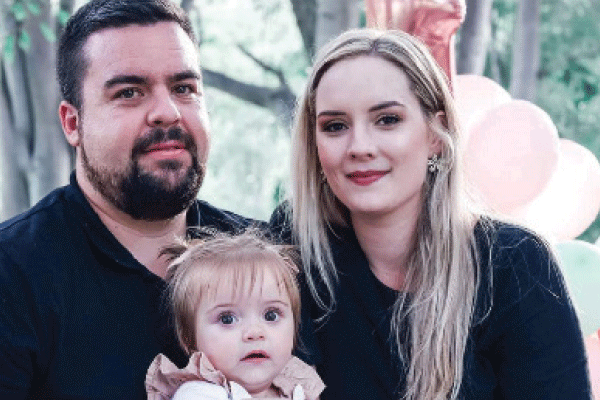 N4/Brits - Juandré Kidson, a 29-year-old father was brutally shot in front of his wife and their one-year-old daughter on the N4 on Saturday 7 May.

The trio lived in Brits but visited Rustenburg almost every weekend to spend time with their close-knit family. As usual they left Rustenburg on Saturday evening after their visit so that they can be in church on Sunday where Juandré played drums for their church band.

As they were traveling an object in the road damaged their tyre. Juandré knew of the risks of stopping on the N4, so he kept going a bit further until he found a spot that felt safe to stop.

While busy changing the tyre three assailants attacked him from behind. He begged them to take everything they want and pleaded with them not hurt his family. They ransacked the car for items including a cellphone and then shot him in the head.

The killers then turned to his wife Johanette Kidson who was holding their young daughter and then attempted to take the baby from her. She fought with everything she had to keep her daughter safe and in the process was shot in the shoulder. Johanette somehow manged to escape and ran into the field next to the road where she hid. A tow truck who was in the area heard the shots and went out to investigate and found Johanette with her daughter. The little girl was unharmed.

Johanette was rushed to hospital for her gunshot wound but has since been released and is staying with her family in-law.

Police spokesperson captain Aafje Botma confirmed that an attempted murder and murder case was opened, and police are busy with the investigation. No arrests have been made yet.

“These people came with one goal – to kill. My brother cooperated with the attackers; he didn’t care about anything else more than keeping his family safe. The killers got what they wanted, they could have just left but they still killed him and shot his wife,” Marco Kidson, Juandré’s younger brother said in an interview with Platinum Weekly.

Marco also has a lot of questions as this is not the first incident on the N4 where the culprits’ placed rocks on the road, causing damage to the vehicles forcing their victims to pull off the road in order to rob or kill them. “What are the police doing to find my brother’s killers. What are they doing to keep motorist on the N4 safe?” he said

Police spokesperson Lieutenant Colonel Mavela Masondo said that the police in Akasia are investigating a case of murder after a man was found dead in a vehicle on the N4 towards Orchards also on 7 May. It is reported that the South African Police Services and Tshwane Metro Police Department members were called to a scene where they found a body of a man with gunshot wound inside an Audi which was missing a front tyre and keys.

The circumstances surrounding this incident are unknown at this stage and the victim is also not yet identified. The Kidson family is shattered by Juandré’s death but has received overwhelming support from the community. “We would like to thank everyone for their support during this difficult time. We are grateful for every prayer, every meal and every candle that you lit in Juandré’s memory just to name a few.”